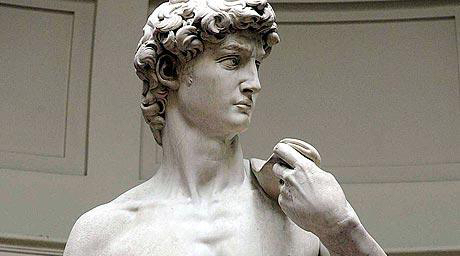 A little father-son advice on the finer points of slaying giants…. How I imagine this conversation going down.

So you’ve come to hear about the giant. Certainly, you are not the first. Go on then. Incline your ear. And, if you have ears to hear, I will tell you the truth about slaying giants.

I was just a boy the day I showed up at the battlefield. A scrawny little upstart, my brothers had called me, just looking for a taste of battle. I ignored their ridicule. I knew who I was, and I was about my father’s business. Although, I must admit the excitement in the air quickened my pulse. Everyone was frantic, cowed by the challenge of the Philistine, Goliath. The air was thick with fear. Oblivious, I only heard the sound of him taunting my God, and could not understand why the army of the Living God allowed it. I looked into the wild, violence-hungry eyes of Goliath, no different than bears and lions that threatened my sheep, and I knew at that moment—he was mine.

They tried to stop me, so I’ve been told, but I didn’t heed a word of it. They tried to clothe me in the armor of the king, but I was no king. I was a shepherd boy, and it was as a shepherd boy I would face Goliath. I knelt by the stream and rolled the cool smooth stones between my fingers, my hand supernaturally steady. I slipped five into the pouch at my hip, envisioning each one making its mark upon the haughty brow.

Alone, I walked across the valley to meet Goliath. The roar of the Philistines echoed from the ridge before me, and the silence of the Israelites pulsed from behind. The drought-cracked earth shook, and vast clouds of dust rose under the footfall of this man. He laughed. He jeered. He disparaged my God.

I said to him, “You come to me with the sword, spear, and javelin, but I come to you in the name Lord.” I declared at the top of my lungs, in detail, his death before he ever reached me. And when he drew near, I ran. I ran straight at Goliath. As I swung the sling and stone overhead, I felt a power behind it that stole my breath. At that moment, I knew I would not need the four stones that remained in the pouch.

That, my son, is how I slew Goliath, the enemy of God’s army. But you asked about the giant. Certainly, he was gigantic. Never in my life have I seen such a mammoth of a man. But Goliath was not my giant. To me, he was an enemy of God like any other. I knew who I was. I knew who God was, and I knew no fear.

Goliath was not my giant, nor were the countless armies I’ve battled. Saul, when he relentlessly pursued my life, was not my giant. Living in exile yet knowing the king’s throne was my God-ordained place wasn’t my giant. Though there were difficult circumstances ever before me, my heart was consistently pursuing the will of God.  My giant came later.

My giant came in the form of a beautiful woman bathing on a rooftop. Sometimes it still surprises me that the simple sight of her, after all I had navigated, was my downfall. But, giants don’t always come in the form of hulking men assaulting your unshakable convictions. The ones that threaten our souls often come slowly, quietly.

I had compromised in small ways long before I ever saw her. I shouldn’t have even been at the palace. I belonged in battle with my men. Instead, I was waking from a mid-day nap. I had moved from fearless man of renowned valor to lounging, passive, and idle. I delegated away responsibility that belonged exclusively to a king. The words passive and idle quickly begot adulterer and murderer. I took what was not mine to take–this woman, and then the life of her husband to cover my sin.

My son, God will not be lied to. My sin was drowning me before I had the time to turn in a circle. Through a valiant man willing to call out a king, and God’s unfailing grace, I was able to find restoration, though not with out heartrending consequence.

After my sorrow, he gave me you, Solomon. One day, you will rule in my place, on this throne that God promised would never fade away. In his infinite grace,  God never once forgot his covenant with me, even when I forgot him.

If you enjoyed my interpretation of a biblical character’s testimony, check out The First Stone, about one woman’s encounter with Jesus.

One thought on “Slaying the Giant”