Don’t laugh, but before we left for Hawaii,
I scrounged around for the movie Pearl Harbor, circa 2001. I know, its not exactly an accurate representation of historical facts, but that’s not why I watched it.

I have a deep love for fiction. Fiction matters, it draws us in. Yes, the romantic drama took more of the movie than it deserved, but the characters served to pull me into the experience of loss, love, and the uncertainty of war. I planned to immerse myself in facts to be sure, but before I went to the U.S.S. Arizona Memorial I wanted to emotionally put myself in the shoes of those who loved and lost, who woke up that morning with an illusion of safety, of being removed from the horrors of war. Fresh on my mind an image of people fighting and defending, even though it was a clear loss. Walking into it, my heart would be opened in a different way.

Going over history is so vital, remembering, but we tend to be a little callous reading facts and figures. Like real people didn’t live and breath, and have fear shooting down their spines as they were slammed onto the pages of history books. Rocked with confusion, shock, desperation. But when we hear a story, things change. We feel. We become that character. I have the utmost respect for my historical writing friends who do sound fact checking, and bring me a story that takes me back in time. That lets me dive into experiences I would never know otherwise.

When I walked out of my hotel room in Oahu that morning, my mind was on the people, sleeping or starting the day 75 years ago. Who would expect this to be the place of such tragedy? I breathed the salty sweet air, gazed over the aquamarine waters, and the rainbows that grace the sky every morning.

At the memorial park, before entering the tour of the U.S.S. Arizona Memorial, the officers reminded us to leave our cell phones silenced in our pockets. Respect. 75 years after the tragic attack, we have to be reminded to have respect. To behave as though what happened here matters to us. Like the men who lost their lives still deserve honor.

The U.S.S. Arizona Memorial isn’t just a historical site. It entombs a large number of the crew lost that day. A National Cemetery. At the time of the Pearl Harbor attack, they didn’t have the advanced DNA identification we have today. By the time they could have gotten to the bodies trapped, it would have been nearly impossible to identify any of the men. We were at war, our fleet destroyed, and more attention by necessity was given to the days ahead than those whose lives were lost. And so it was decided to leave the men at rest with the ship they’d given their lives to defend.

We watched a 20-minute video, giving us the history of the events leading to Pearl Harbor, the attack, and the response. Then, we boarded a ferry, the only way to reach the memorial. They asked for silence and reflection on the boat ride. To take a moment and ponder the sacrifice of those men and their families.

Its a rare moment to sit with a group of people, warm in Hawaiian sun. No phones out.  No one is taking pictures in the five-minute approach to the white memorial spanning the place where the ship rests on the shallow harbor’s floor.

There is a hush as we disembark. My mind flashes back to the cinematic representation, the men caught unawares. The terror. The moments of helplessness, and then the fight against the odds. I thought not only of their terror, but of the false sense of safety their loved ones felt at their seemingly sheltered location, and the way information traveled so much slower then, both a blessing and a curse.

Studying the memorial, I wondered at its design, what it was meant to convey. It straddled the width of the sunken ship, but left it untouched, floating above.  White, strong at both the ends,but a sag in the middle. The open spaces letting in light, or were they holes in a neat system?

In the assembly room, I stared out the blue-jade waters of the bay, looking for the outline of the ship underneath. A little dark teardrop rose from the depths until it reached the surface, opened, and bloomed a wobbling rainbow of color. Was that…oil? I paused a little longer, and it happened again.

I continued walking along, taking in the scene. The memorial has a chapel’s hush. The drops of oil still on my mind. At the far end is a wall, the shrine room with each name engraved in marble.  I took a moment to pick out a few names to give my focus, thinking about the person they might have been, and the family they might have had. The National Park Service Officer is giving a talk. 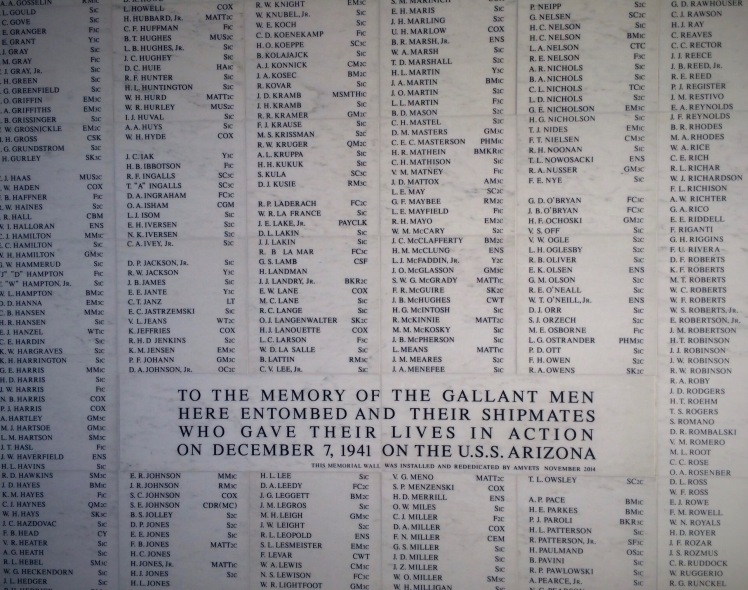 A special honor is offered to every surviving member of the crew. At their death, they have the option to be cremated, and the capsule taken down by divers on December 7th, the anniversary of the attack, to be placed under the one of the gun turrets, reunited with the brothers they lost. Six members of the crew are still living today.

Warring emotions roll through my heart, and then my mind. On the one hand, it is such a poignant thought. To be reunited. To honor that moment of history that you were a part of. The bonds of brotherhood that time could not erase.

But then again, it breaks my heart. Please don’t misunderstand, I’m not sitting as a judge, I’m just rolling around thoughts. Something about it feels wrong. They were afforded years and years the ones entombed in the ship did not get. They’ve gone on to have families, lived lives they are proud of, I hope. And so to go back and be placed in the ship, almost as though that’s where they should have been all along. It makes my heart so heavy.

Again, I’m not judging their reasoning, or saying its wrong. I didn’t have their experience. It’s truly a unique honor, painfully beautiful. I suppose my heart breaks a little, imagining how that day must have marked the lives of those men who survived. A brotherhood bond formed as shipmates, but then forged by terror. They knew what it was to have been there. They smelled the smells, and felt the heat, the terror, the panic. I just read and imagine.

I walked a little further. The Park Service Officer has moved to a different location, he’s talking about the oil. The Arizona went down the day after she was fully fueled with nearly 1.5 million gallons of oil. They don’t know exactly how much oil she still holds. Much of it spilled and burned in the harbor in the subsequent days after the attack. They estimate she drips nine quarts of oil into the harbor everyday.  They’re called the Tears of the Arizona.

Environmentalist say the impact is minimal, though they do keep an eye on the state of the ship’s deterioration. As of now, there is not enough of a concern to destroy the final resting place of over 1,000 men.

The Arizona has been weeping for 75 years. Urban legend says she’ll stop when the last Pearl Harbor victim passes away.

I don’t put stock in urban legends, but I do find it unique, the “tears.” Their constancy. How quick we are to forget.

Be careful with the grief of others. We have a  mental timeline for which people should “move on” after loss. Whatever that mysterious timeline, people are either judged to move on too quickly, or not at all.

Grief is a funny thing. No two people grieve alike. The Arizona, she still mourns. But she is more than a place of mourning. She is a place of inspiration. Of valor. Of courage. Of survivors.

Let us not become our grief, but also avoid sweeping it away as though it was never there, like it didn’t shape our history….like we are unchanged. Let us grow from it. Those who stand by, let those who mourn, mourn. If the mourning is causing damage, step in then. But until that point, let it be. Be a witness. Seek to understand. Be near, and of an open heart. Fear not the pain of another human being. Blessed are those who mourn, for they shall be comforted.

I’ll see you next Thursday with another Hawaii inspired post, Walking on Broken Glass, on the spirit of redemption <3.

Does anyone have a favorite historical fiction based around the events of Pearl Harbor? I would love to add it to my “to-read” list.

One thought on “75 Years of Weeping”