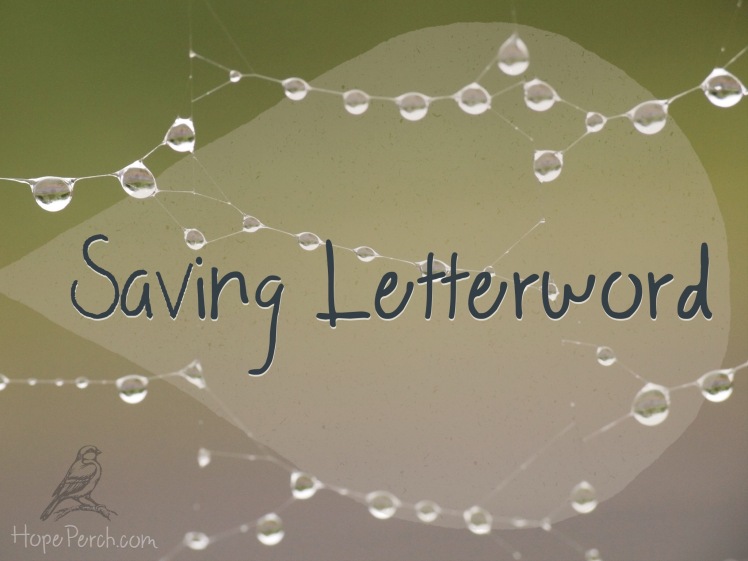 I hate spiders. Loathe them. (Detest, despise, revile, abhor, eschew….you get the picture) Why? Too many eyes and too many legs. The way they move. The way they bind their prey and suck their insides out…yuck. The ones that pounce on their victims, even worse.

I grew up in a log cabin that was an occasional habitat for large brown spindly-legged spiders with a special affinity for sprawling out in all their creepiness on the wood walls and ceilings. I’d sit on my bed for hours reading a favorite book, and then a flash of movement out the corner of my eye revealed a camouflaged spider as large as my palm skittering across the wall.  It had been perched next to my head undetected the whole time…gah…

Confession: After all this spider talk I just did a full-out heeby-jeeby dance because the air vent under my desk blew a piece of fuzz across my foot. As a person who prides herself in being a level-headed, independent woman, it’s a little embarrassing to admit that the thought of a spider can make me lose my cool in a half second.

One time, when my husband was on a trip to India, one of the palm-sized spiders of the same species that haunted  my childhood appeared in our bedroom. I called him and told him he had to come home and kill it. I was only half kidding.

I make a singular exception to my spider hating. I love yellow writing spiders. Hey, I’m a writer, too. I know the struggle. I support writing in all its forms.

If you could have seen my husband’s face when I said that line over dinner last night….Come on, I have to be a fun person to live with, me with all my quirky deadpan humor.

Seriously though, I do love writing spiders. Somehow, I see fascinating beauty instead of horror. And last week, I snatched one such creature from the jaws of death. Yea….you read that right. I saved a spider’s life. I told my husband that too over dinner….just when he thinks he’s reached the depths of my quirkiness, I take him further. Lucky you…I’m taking you there too.

A little writing spider appeared on our front door last week. I pulled up info online and taught my critter-loving son all about them. I started reading Charlotte’s Web to him. He named his spider-friend Letterword.  It was a beautiful thing.

Then Terminix came. They come every few months to spray around our house. I didn’t think a thing about it until an hour later. Letterword! I felt awful. The little creature was just minding his own business, and inspired research and story time with his simple presence. He was sure to be a goner.

Trying to be low-key, I peeked out the door at him. He seemed a little…off-kilter. The damage had been done. My stomach sank. What was I going to say to my son when he asked about Letterword? Would I have to hide his foam nunchucks, and talk him down from avenging Letterword’s death the next time the Terminix guy came callling? Maybe he would forget about the spider. (Yeah right)

Throughout the day, I kept checking up on the little guy. He grew weaker. I felt like a dog, but what could I do?

The next day, the thought of him crossed my mind as we were getting ready to run errands. I walked to the front door. His web was empty. Then, I saw him crumbled on the porch below. 😦  Would it count as lying to simply tell my five-year-old that Letterword had moved on to….uh…..to a better place?  I knelt down. One of his little legs wiggled feebly. He was still alive!

Then I dove deeper into my weird side. If the spray hadn’t killed him by now, then maybe he got weaker because he remained in the same environment. What if I moved him? I scooped him in a jar, stashed him in my room, and went on with my day.

Honestly, I expected him to die, but putting him in the jar was at least an effort on his behalf. When we returned home, he was still alive, and a little stronger. Two days went by, and he was back to his old self. (That’s right, my husband also found out last night that I had kept a spider in a jar in our bedroom closet for two days….his face you guys….. 😀 )

Letterword returned to his writing career in the wild, and is currently penning the next BuggyTimes Bestseller.

Sometimes the difference between our success and failure, life and death,  is the environment we’ve chosen. Is it time for you to make a move?

Happy Thursday everyone! One more day until Friday!  Don’t forget to sign-up for my newsletter if you haven’t yet. The very first one goes out tomorrow! You’ll see a little update on my writing journey and a short excerpt from my work-in-progress novel, Anna’s Vineyard. I promise not to spam you guys. You’ll receive an email from me once a month, at most. You can unsubscribe at any time.

One thought on “Saving Letterword”